Testing and Resetting a GFCI

GFCIs should be tested about once a month. If it doesn’t trip when testing (but it has power to the line side), then it will need to be replaced.

Power is connected to the GFCI line side as shown. The load side of the GFCI will have yellow tape over it and is not connected in the diagram below. 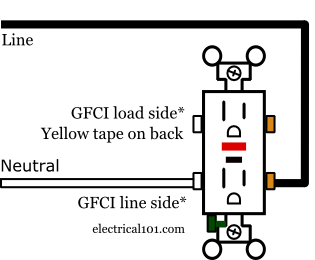 Can I Install a GFCI with no Ground Wire?

Yes, a GFCI will work properly if there is no ground. A plug tester with a GFCI test button will not trip the GFCI because the tester leaks a small amount of current from line to ground. The GFCI test button is used for testing.

A GFCI adapter can be used on a standard receptacle. Plug the adapter into a  receptacle and anything you plug into the adapter will have GFCI protection.

Testing and Resetting a GFCI Breaker

If the breaker does not trip when the test button is pressed, e

Ground connection is not shown

*Line and load side locations can differ between GFCI receptacle manufacturers