Motion detectors and occupancy sensors can detect movement and then cause an event to happen. They are commonly used for security and saving energy.

When the sensor in a security flood light detects movement, it tells the switch to close, and light(s) turn on. After a certain amount of time, the switch will open and light(s) will turn off. Some motion detectors and occupancy sensors have adjustments including how long light(s) stay on without detecting movement.

Occupancy sensors are commonly used in offices and classrooms. They can also be used at home in closets if lights are usually left on.

Occupancy sensors can replace light switches, or can be mounted in the ceiling. They detect motion in the room and control lighting automatically. If no motion is detected after a certain amount of time, lights turn off. When someone enters the room, the sensor detects motion, and the sensor’s switch is closed, turning on the lights.

Lights can be turned on and off manually with a button or switch on the sensor.

Some occupancy sensors have adjustments including how long light(s) stay on without detecting movement.

Motion detectors can be used for many different applications. When motion is detected, a light is turned on or an alarm is activated. They can be used for:

This man saved 90% on his electric bill in his warehouse by installing LEDs and motion detectors.

How The Internet Can Lower Your Electric Bill By 90%

Supermarkets are using them in aisles and freezer sections to turn lights on when a customer comes near, and will shut off after a certain amount of time. This works well if a store is open 24 hours and there are very few customers at certain times. 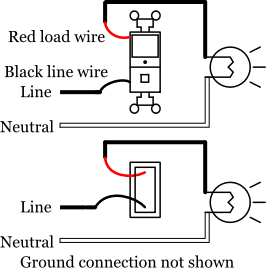 Occupancy sensor switch wires each have two black wires, (or one black and one red) and ground (green).

One of the black line wires connects to line voltage from the panel, the other black (or red) load wire connects to the light(s). Each black wire can be a line or a load. Red is always the load wire. 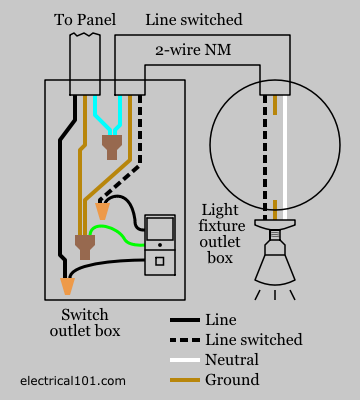