How to Troubleshoot Three-Way Switches

When a 3-way switch fails, there will usually be no continuity between the common terminal and one (sometimes both) traveler terminals of one of the 3-way switches.

Usually when a 3-way switch fails, lights can be toggled on and off at one switch, but not the other. If one of the two 3-way switches toggles the light(s) on and off, the other 3-way switch has probably failed. Follow these steps to find which switch is bad.

One of these switches will not turn the light on and off (while the light is on) and that is the bad switch.

Once you identify the bad switch, follow the steps below to verify it is bad and needs to be replaced.

Note: This article only applies to conventional 3-way switch wiring, and not alternate 3-way wiring.

Switches are spring loaded to minimize arching and prolong their life. However, a very small amount of arcing is present when a switch is toggled. A bad switch may not fail completely, burned contacts may cause intermittent failure. Keep this in mind when troubleshooting switches. Intermittent failure could make troubleshooting difficult, especially with 3 and 4-way switches. If one 3-way switch needs to be replaced, the other one should be replaced too. 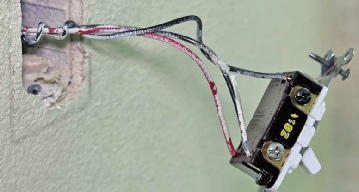 Black common wire is usually wrapped around the two traveler wires on a 3-way switch.

How to Test and Replace a 3-Way Switch Video

No Power to Outlets