Leaving a light on in your car for a long period of time can drain an automobile battery enough so that the engine won’t start. If an automotive battery is fully discharged, it should be recharged as soon as possible.

If the battery terminals are corroded, use baking soda and water or a commercial car battery cleaner. After cleaning, use a commercial battery protector and sealant to help prevent corrosion.

Can I use tap water to fill a car battery?

Only use distilled water to fill a car battery because tap water contains minerals and chemicals that could contaminate the battery.

How long does a car battery last?

A car battery usually warns you if it is getting ready to fail. The starter may sound labored when starting or require a jump start after long periods of not being driven. If you get any of these warning signs, take it to a mechanic or auto parts store and have the battery tested. When a battery is ready to fail, have it replaced as soon as possible to avoid getting stranded.

How to jump start a car battery

It takes hundreds of amps to start a car, so all cable connections to the batteries must to be solid, and free from corrosion and paint. Connecting or touching the jumpers to the wrong battery terminals can cause a short circuit. A short circuit can create an arc flash (cause burns) and possibly damage the batteries.

The car with the dead battery will need to be driven for up to an hour to recharge the battery so the car can start up again after being turned off. If you have a car battery charger, you can drive the car home and connect the battery charger for an overnight charge. 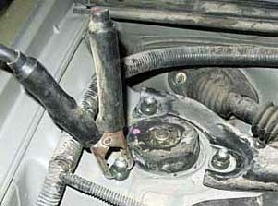 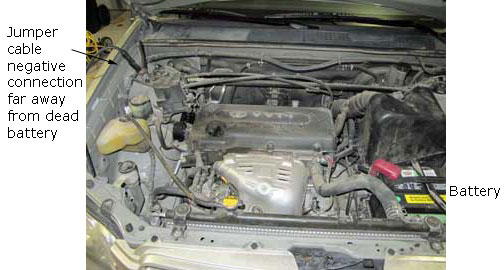 How to test a car battery

The best way to test a car battery is with an automobile battery tester (mechanic or auto parts store). If you have a volt meter, measure the voltage on the battery after a charge. It should be a little more than 12 volts after charging and close to 12 volts long after it has been charged. If you charge it with a good battery charger in the evening and measure 10 or less volts in the morning, the battery is probably bad.

How to test car charging system

A mechanic can test your charging system, or if you have a volt meter, you can test it yourself. Select a DC voltage range of 20 volts or more. With the car not running connect or touch the red positive (+) test lead to the positive terminal of the battery. Connect or touch the black negative (-) test lead to the negative terminal of the battery. With the engine off the reading should be about 12 volts (for a 12 volt battery).

Turn on the engine and again connect the meter leads to the battery. If the meter shows about 13.5 to 14.5 volts (sometimes as high as 15.5 volts), the car charging system is good. If the dead battery has internal shorts, you may get false (lower) voltage readings because the battery is putting too much of a load on the alternator.

How to Choose an Electrician