How to Replace a Ceiling Light Fixture

How to Replace a Ceiling Mounted Light Fixture

Replacing a ceiling mounted fixture is fairly simple, and can be done with screwdrivers (flat and/or phillips). Power needs to be turned off at the electrical panel. A shop light (might need extension cord) or headlamp will be needed. The new light fixture kit should contain mounting screws and wire connectors.

The instructions are reversed to mount the new fixture. The wire connectors that came with the new fixture should be used to connect the wires together from the electrical box to the fixture.

See How to Install a Wire Connector.

Ceiling mounted fixtures are mounted directly to an electrical outlet box that is above the ceiling. This fixture can only be placed directly under the outlet box. This type of fixture has a base and a cover. The base mounts to the electrical box and contains the wiring and bulb socket(s). The cover is usually made of glass, and attaches to the base with three screws. 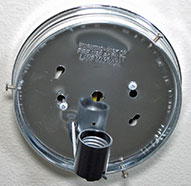 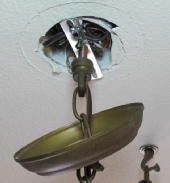 How to Choose an Electrician