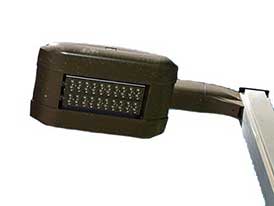 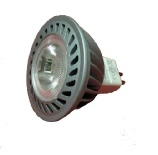 The early days of LED (light emitting diode) bulbs gave us high prices and low lighting quality. Now that this technology has matured, prices are down and lighting quality is up.

LEDs have a very long life span. This is the latest technology in lighting and is constantly evolving. LEDs have been around for a long time. They started out as very small semiconductors (about the length of a grain of rice) that are mounted on a printed circuit board. When an electrical current passes through the LED, the electrons are excited and emit photons that can be seen as light. Sometimes, bulbs contain a number of LEDs depending upon the desired light output and the physical size of the individual LEDs.

LEDs are used in indoor lighting, floodlights, flashlights, autos, and more. LEDs are replacing some neon lighting in Las Vegas. Unlike CFLs, LEDs achieve full brightness right away. LEDs are usually dimmable, look for “dimmable” on the package.

LED bulbs have a built in power supply at the base to convert AC voltage to a low voltage to light the bulb. They also have a metal heat sink which might make them unattractive for track lighting. Prices for LED bulbs are relatively high, but they are coming down. The quality of light, while not very good in the past, is now improving.

LEDs have a life expectancy of about 10 years. LEDs are expensive so check the warranty and keep the receipts in case they fail prematurely.

Your local power company may offer discounts on qualified Energy Star LED bulbs through participating retailers. Discounted LED bulbs will be sold at certain retailers. Participating dealers are listed on the power company’s website. Look for the "Simple Savings" sticker on the LED bulb package. Similar discounts were available in the early days of CFL bulbs.

Check your power bill or power company website to see if they offer these discounts and list participating dealers. If you have never tried LED bulbs, now may be the time to buy them. LED bulbs are usually dimmable, but check the package just to make sure.

LEDs are becoming quite popular in the commercial environment as replacements for HID and halogen lights. Below are some examples of LED retrofit projects. When considering LED retrofits for existing lighting, make sure they are covered by a good warranty. Even though LEDs should last a long time, you don’t want to pay a lot of money and have the LEDs fail over a short period of time.

This man saved 90% on his electric bill in his warehouse by installing LEDs and motion detectors.

How The Internet Can Lower Your Electric Bill By 90%

LEDs generally have a reputation for lasting ten years or more. For the most part, LEDs are very reliable. There are many companies that manufacture LEDs, some are more reliable than others.

In the commercial environment, while LED failure is not common, it certainly does happen. Sometimes more than one LED bulb from the same batch fails. 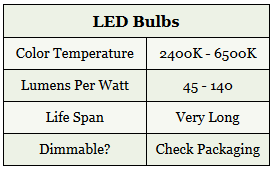